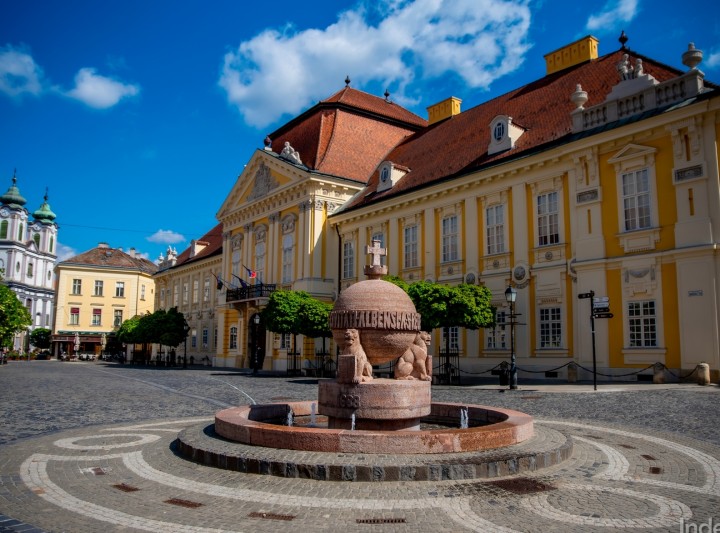 On the path of kings

Did you know that in medieval Hungary one could only be the rightful monarch if the Archbishop of Esztergom placed the crown of St. Stephen I on their head in Székesfehérvár? We can follow the footsteps of our kings. Let’s open the history book of our country together!

One of Hungary’s most ancient and historically rich cities was founded by Grand Prince Géza in 972 and during the reign of Stephen I became a royal and cultural centre. The National Memorial Site comprises of the remains of the one-time coronation basilica built by Saint Stephen the King – Our Blessed Lady Basilica. 36 Hungarian kings have been crowned between its walls. As well as St. Stephen and his son Prince Emeric (Imre), another 14 kings also chose the basilica for their resting place. We can find our founding father’s carved stone sarcophagus in the St. Stephen Mausoleum. On the surrounding walls we can follow the story of the Holy Crown and the legend of the Holy Right on Vilmos Aba-Novák’s historic secco. In the town hall a copy of the Holy Crown can be seen. Its base is made of fine silver and it is covered in pure gold. This piece of art weighing 1.5-kilos is decorated with 19 enamel pictures, 8 framed enamel pictures, 80 almandine stones, 4 sapphire stones, 410 pearls, 6 amethyst stones and 1 turquoise stone. It is not only the crown which points to medieval past but also other crowning jewels. According to the inscription on the most emblematic piece of art dominating the main square of the city, the Orb: “Fehérvár is a free city by the grace of St. Stephen”.

It is worth extending our tour by visiting the archaeological exhibition of the St. Stephen Royal Museum where we have a chance to admire the remains of the stone carvings of the royal basilica amongst the treasures of the millennia. Remains of tombstones, sarcophaguses, altars and statues of emperors are exhibited here amongst the stone remains from the 1st to 4th century.

On the path of kings – standard sightseeing programme

Price of the programme in a foreign language: 22 000 HUF/group

Entrance fee to the National Memorial Site as part of the programme: 700 HUF/adult, 350 HUF/child

Price of the programme in a foreign language: 25 000 HUF/group

Entrance fee to the National Memorial Site as part of the programme: 700 HUF/adult, 350 HUF/child