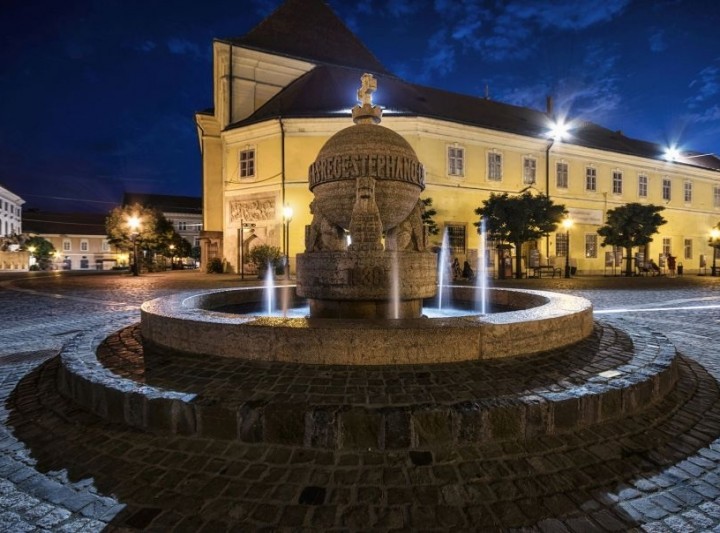 Béla Ohmann's work of art- 'The Right of Fehérvár' depicting one of the crown jewels of Hungarian kings dominates the main square of the city. The  Latin inscription of around it means: “Fehérvár is a free town by the grace of St. Stephen”.

Székesfehérvár was given its free royal town status by St. Stephen, founder of the state. The work of art- ‘The right of Fehérvár’, in common use it is called the Orb- commemorates this ancient right. The Soviet army boarded it up in 1945. In the 1950s it was cut in half and the upper half was removed with the cross. It regained its spherical shape in the 1960s and in 1986 the cross was also taken back. Three lions hold the Orb above the well-fountain. Each of them guarding a coat of arms of the country, the city and  Andrew II. The three dates below them indicate three important events in the life of the town.

1688 – the liberation of the town from the Ottoman rule

The Orb is surrounded by the Bishop’s Palace and the Székesfehérvár Diocese Museum but besides them the other characteristic building of the square is the Town Hall. The right wing of the building was recorded as the town hall in the land registry as early as 1698. It holds one of three murals by Vilmos Aba-Novák in the town and also the certified copy of the Holy Crown bought by public donation.